FSSAI notifies standards for fortification of staple foods in India

August 12, 2018
Eradication of Malnutrition is “generally” the prime motive

Although fortification is arbitrarily allowed in India since last one year, it has been officially regularized yesterday. The official launch of this initiative was glorified with the presence of Bill Gates as the founder of Gates foundation in 2016. Showcasing the alarming rates of malnutrition, Government of India in confluence with FSSAI has launched this initiative to dent the stunning numbers of under nutrition. In spite of its aggressive promotion from last 18 months the undernourishment in India stands at staggering 14.5% of overall population (19.07 Crores), as per a recent study by The State of Food Security and Nutrition. In this final published notification, there are some key takeaways and excessive mention of the word “generally” under each clause which makes this notification appear very subjective for food businesses to comply these regulations.

What are the “general” principles for adding a micro nutrient?
Largely under Part 2 and Clause 3 the authority stipulates its rationale for addition of micronutrients in the food. Instances like deficiency and improving health to population were demonstrated as the need based on the “generally accepted scientific evidence”. However, it has not to cover what are the acceptable sources and hope a guidance document would bring some authenticity to the sources

What are the “general” obligations?
Apart from undertaking on quality assurance, the Apex body has emphasized on the aspects of timely laboratory report, inventory records of fortificants and other aspects like auditing and purity criteria. All these requirements have to be submitted bi-annually along with other generally applicable rules in other FSS Act, Rules and regulations. The explicit exclusion of vitamin manufacturer’s responsibility in the final product would be a deterrent to compliance for the staple food manufacturers.

What are the packing declarations?
A packing declaration on the content of micronutrients used in the products has to be declared on the label in the following format “fortified with ……………………… (mention the name of the fortificant in the blank)” accompanied with a fortified logo and tagline as mentioned below 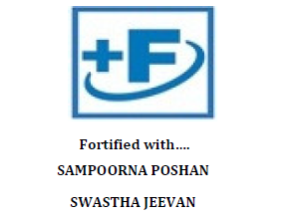 What products are allowed to fortify under these regulations?

Currently FSSAI allows fortification in only Salt, Milk, Atta (wheat Flour) and Raw Rice. Further, based on the instructions from Government of India, the food authority may recognize mandatory fortification of staples or any other food. Please refer to the allowed nutrient components, level of nutrients and their source in the link on original notification (below)

What are the areas the food business to focus as part of compliance to these standards?
Clearly, the compliance aspects appear to be ad-hoc it is imperative for the industry to get clear guidance from the Authority on the areas like testing parameters, risk assessment and licensing requirements. Further, it is also unclear weather the fortification is mandatory or voluntary. However, based on the preamble in this notification, FSSAI with cognizance of GOI may mandate any food under fortification. Hence, the fortification in the staple food is on the discretion of food businesses.

For a more personalized report on the notification please contact us at smartcomplainz@outlook.com

(All content provided on this blog is for informational purposes only. The owner of this blog makes no representations as to the accuracy or completeness of any information on this site or found by following any link on this site)

Popular posts from this blog

Regulating claims and advertisements on food products in India